hello this is a link

I am writing today to ask you to take final actions to help ensure City Council approval of the proposed Mass+Main mixed-income residential district that includes an unprecedented 47 new affordable housing units in Central Square.

In recent weeks the Ordinance Committee of the City Council and the Planning Board have both sent positive recommendations on the proposed Mass+Main zoning to the full City Council. Next Monday, May 18th the City Council will vote whether or not to implement these proposed zoning changes.

We need you to take action in the coming week:

A Better Cambridge stands in full support of the Mass+Main zoning, primarily for it's inclusion of 20% affordable housing, including 40 units for low-income families and 7 units for middle-income families. In addition, we endorse other key benefits of the proposal, such as its inclusion of family-sized 3 bedroom units, an innovative approach to reducing parking demand generated by the development, a commitment to making commercial rents affordable to local businesses, and creation of a public market.

Don't just take my word for it. Last week, the Cambridge Chronicle featured three letters from community members detailing why they believe Mass+Main is the right project for Central Square at this time.

Thanks for your support!

I’ve emailed you frequently over the last few months, asking you to join ABC in our efforts to support the proposed Mass & Main mixed-income residential district in Central Square, and to hold the developer accountable for making 20% of the housing units affordable to low- and middle-income Cambridge families.

Thanks to your support, in March the developer announced they would meet the 20% threshold called for by ABC. As a result, this development  will bring 47 new and much-needed units of affordable housing for low- and middle-income families in the heart of Central Square. No other proposal near Mass Ave. and Main Street contemplates nearly as many affordable family housing units, at a time when increasing the affordable housing supply is a shared community goal in Cambridge.

After the City Council Ordinance Committee approved the Mass & Main zoning earlier this month, we’re now in the final stretch with key City Council and Planning board meetings coming up this week.

We need you to take action right away to help make this important mixed-income housing development a reality:


Thanks for your support,

As an advocate for a diverse Cambridge, I am hoping you can take action this week to support the creation of more affordable housing in Central Square.

Last November, Normandy Partners/Twining Properties submitted a zoning petition to create a higher-density, mixed-income and mixed-use zoning district near Mass Ave. and Main St. in Central Square. While A Better Cambridge expressed our support for key elements of the proposal, we called on Normandy/Twining to increase the number of affordable units in the project to 20%.

Our advocacy worked, and last week Normandy/Twining announced that they would increase the affordable housing percentage to 20%. This includes 17% of all units for low-income families and 3% for middle-income families. In total, this means 47 new permanently affordable and privately subsidized housing units could be built in Cambridge.

Now we need you to take action to make sure this affordable housing is built!

Finally, I invite you to join us for the next ABC general meeting this Thursday to hear about other opportunities to be involved with our advocacy work:

I hope to see you this week!

ACTION ALERT: Tell the Planning Board to Support a Diverse & Affordable Central Square

Thanks to your action earlier this month, the City Council Ordinance Committee heard a clear message: Cambridge residents support zoning that will bring more affordable housing and transit-oriented development to Central Square.

Now it's the Planning Board's turn to consider the proposal from Normandy Partners/Twining Properties to build a mixed residential and commercial development that would add more affordable housing just steps from the Central Square T.


HOW CAN YOU TAKE ACTION?
We need you to send the Planning Board a strong message by:

1. Attending next week's Planning Board meeting to publicly testify in support of the Normandy/Twining proposal:


2. If you cannot attend the meeting, email the Planning Board by Tuesday to register your support for this proposal. Even if you can attend, consider sending an email to reinforce your support:

3. Still haven't sent a letter to the City Council? It's not too late:

Tell the Planning Board: Yes to Affordable Housing in Central Square


Now we need you to send the same message to the Planning Board:

1. Attend this week's Planning Board meeting to publicly testify in support of the Normandy/Twining proposal:


2. If you cannot attend the meeting, email the Planning Board by Tuesday to register your support for this proposal. Even if you can attend, consider sending an email to reinforce your support:

3. Still haven't sent a letter to the City Council? It's not too late:

Be sure to read last week's Action Alert for talking points to include in your comments to the City Council and Planning Board.

Letter to the Editor: Why City Council Special Permit Granting Authority (SPGA) is a Bad Idea

Note: This letter was written for submission to the Cambridge Chronicle by ABC member Seth Zeren, a City Planner with experience working in a town where Special Permit Granting Authority was administered by elected officials. We reprint it here to help you become better informed about this complicated proposal. Click here to take action against designating the City Council as the exclusive special permit granting authority for Project Review Special Permits.

The City Council is discussing a zoning petition filed by Councilor Dennis Carlone that would take the authority to grant special permits from the Planning Board and give it to the City Council. I understand that some are frustrated with recent decisions made by the Planning Board; with 90 years of hindsight, few in the planning profession would suggest that the typical Planning Board process is perfect. There are many ways that we could improve it—for example, requiring early community meetings before a developer spends hundreds of thousands of dollars on a complete design, or making better use of online forums to expand the number of voices who can weigh in on projects.

I have worked for a municipality where the legislative branch had taken on the power of granting special permits. The system was so problematic that there were active attempts to move away from it. The underlying problems were:

Sign Our Petition: Tell City Council & Planning Board to Vote NO on Net Zero Zoning 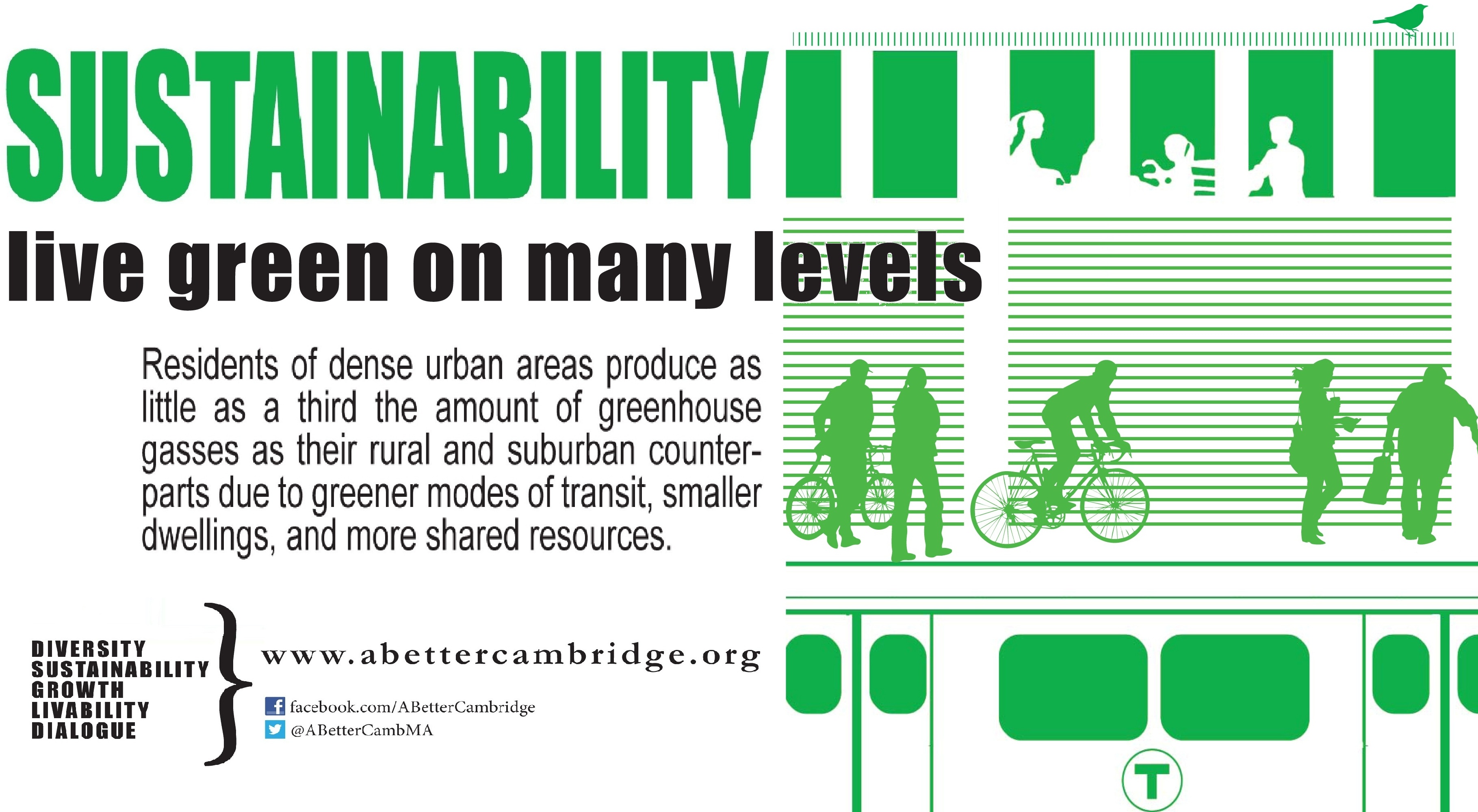 We believe that the Net Zero zoning proposal, however well-intentioned, is a narrow, inadequate and potentially harmful approach to reducing carbon dependence and emissions in Cambridge. For this reason, we ask the Cambridge City Council and the Planning Board to vote down this proposal to give our community the chance to implement broad and effective sustainability measures.

On behalf of the members of A Better Cambridge, I am writing to ask you to vote NO on the Connolly Net Zero proposal.

While we wholeheartedly agree with the goal of eliminating our dependence on fossil fuels in Cambridge, we believe that the Connolly Net Zero zoning currently being considered by the City Council and Planning Board would do more harm than good in our community:

Have feedback? Feel free to leave it in the comments below. Also, we encourage you to visit the Cambridge Civic Journal and participate in the conversation in the ongoing conversation about our statement on the net zero zoning petition.

The members of A Better Cambridge thank the proponents of the Connolly Net Zero Petition for provoking such an important discussion about climate change adaptation in Cambridge. The Connolly Petition has challenged our community to take a serious look at how we will eliminate consumption of fossil fuels and promote alternative energy use across the city of Cambridge.

A better Cambridge is a net zero Cambridge. Eliminating carbon emissions should be a primary goal in Cambridge. We believe that a viable approach to serious energy efficiency in Cambridge relies on a multi-pronged strategy that addresses what we require of new development and how we adapt existing buildings, with a focus on multi-modal transportation throughout. A key achievement will be that carbon emissions are reduced within our city through construction of better and more efficient buildings, without at the same time exporting emissions to communities outside of our borders.