Please join ABC members for a status update this Wednesday (Jan 26) at 6:00pm. We’ll explain what's been going on lately at the City Council, talk about what ABC is organizing, and answer any questions anyone might have about ABC or current policy discussions. It’s open to the public, so please send the registration link to friends after you’ve signed up yourself!

The ABC Book Group will discuss the first half of Donald Shoup’s The High Cost of Free Parking at 1:00pm on Saturday, February 26, at Darwin’s on Cambridge Street. Shoup knows more about parking and its effect on cities than just about anyone, and he can write, too! (“Minimum parking requirements act like a fertility drug for cars.”) For more information, please contact PJ Santos. 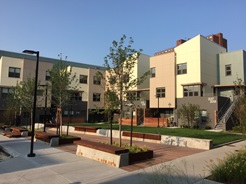 CHA’s Margaret Moran notes that “As a society we use beauty as a signifier of value, and past winners have tended to be well-funded buildings for prestigious clients. This year, for the first time, public housing has been nominated.  Your vote for Jefferson Park […] says that beauty should belong to everyone.”